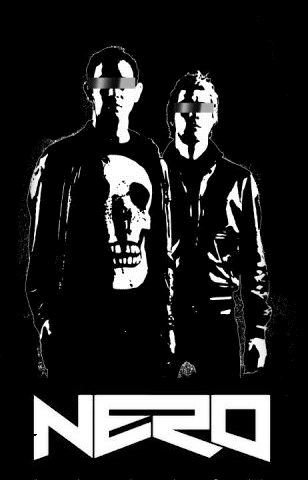 Nero is a group of music producers consisting of Daniel Stephens, Joseph Ray and their supporting vocalist Alana Watson.

Nero first came to widespread attention with a devastating remix of 'The Streets Blinded by the Lights' Sasha Frere-Jones, a journalist for the New Yorker Magazine, listed Nero's remix of, "Blinded by the Lights" in his top songs of 2009. The track had radio airplay in the UK and also was played by DJs during their live sets, which transformed Mike Skinner’s bittersweet original into a monstrous UK bass banger and was a massive hit with DJs as diverse as Chase & Status, Skream, Tiësto and Diplo

Nero composed an orchestral piece known as The Dubstep Symphony (later officially titled 'Symphony 2808'), performed by the duo in collaboration with the BBC Philharmonic Orchestra, conducted by Joe Duddell on BBC Radio 1 on 6 June 2011.

They’ve subsequently twisted La Roux’s I’m not Your Toy and Deadmau5’s Ghosts 'N' Stuff into strange new shapes as well as delivering heavyweight remixes for Daft Punk, N.E.R.D and Beyonce. Chase & Status are fans: releasing Nero’s Innocence on their MTA (More Than A Lot) label and enlisting Nero to remix their single Let You Go.

Retrieved from "https://bassmusic.fandom.com/wiki/Nero?oldid=9959"
Community content is available under CC-BY-SA unless otherwise noted.