Start a Wiki
Chase and Status 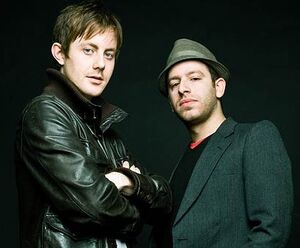 Chase & Status 'aka Will Kennard and Saul Milton. The duo, enjoy heavy rotation in the hands of dub-step royalty such as N-Type and Skream.

Will and Saul met in London through their mutual love of Drum and bass in the mid nineties before later cementing their friendship by Dj’ing together at Manchester University. 2004 saw their first production, a remix for Future Cut which was followed by a series of drum and bass anthems for the biggest underground labels including ‘Duppy Man’ for Breakbeat Kaos and ‘The Druids’ EP for DJ Zinc’s trendsetting Bingo label. Despite a high volume of releases on Ram Records and constant DJing around the world, Chase & Status managed to mastermind and release their debut album ‘More Than A lot’ in 2008. Packed with the kind of drum and bass anthems that have helped build their reputation, it also features tracks which show the diversity of their work: such as ‘Pieces’ featuring Plan B and the Radio 1 A-List single ‘Against All Odds’ featuring Kano. The album is a thrilling journey through the UK urban scene and truly deserves its title. One track from the album, ‘Eastern Jam’ was even spotted by Snoop Dogg who newly released it in April 2009 as ‘Snoop Dogg Millionaire’.

They have been enthusiastically supported by Radio 1 tastemakers Annie Mac and Zane Lowe. Pharrell Williams of N*E*R*D hails them as ‘The most exciting producers in the UK today’, Rihanna considers them ‘the backbone’ of her record ‘Rated R’ but this isn’t enough to quench the musical thirst of multi award winning, platinum record selling producers, writers and musicians in their own right, who also can count Jay Z and Snoop Dogg as fans, as well as drum and bass’ finest Andy C, Hype and Pendulum;

In 2009 Chase & Status began crafting their, now renowned, live show which they debuted at the BBC Radio 1 Big Weekend that year. Their live set up includes the legendary Andy Gangadeen on drums and enigmatic front man, Rage as their MC. The show features an exhilarating mixture of lighting, video and guest appearances from vocalists including Plan B and Tinie Tempah as well as rising stars Delilah, Liam Bailey, Maverick Sabre and Mali who all appear on ‘No More Idols’. The live show continues to draw in record attendances through two years of headline festival appearances, five sold out UK tours, three sold out European tours, two sold out US tours and repeated festival appearances across the globe from Coachella to Big Day Out, Ibiza Rocks to Summersonic in Japan. Having signed both a major publishing deal with Universal Publishing and a major record deal with Vertigo / Mercury Records in 2009, the duo smashed straight into the Official UK Top 10 with single ‘End Credits’, their second collaboration with UK vocalist, Plan B which featured in the gritty British movie ‘Harry Brown’ starring Michael Caine. The video to this track would go on to win ‘Best Video’ at the 2010 Q Awards.

2010 saw Chase & Status next release ‘Let You Go’ Feat. Mali which undoubtedly became the anthem of the Summer festivals along with ‘Hypest Hype’ featuring grime artist Tempa T which was released as a free download. At the end of January 2011, Chase & Status released ‘Blind Faith’ feat. Liam Bailey, which entered the UK singles chart at No. 4, the bands’ highest charting single to date. One week later, their hotly anticipated second studio album ‘No More Idols’ was released and went flying straight into the No.2 spot on the UK Album Chart second only to Adele’s worldwide smash ‘21’.

Musically, ‘No More Idols’ sees Chase & Status move from the punk-like riffs of ‘Fire In Your Eyes’ featuring soulful vocalist Maverick Sabre to the hip-hop beats of ‘Hitz’ featuring Tinie Tempah via tracks with some of the hottest names in music such as Dizzee Rascal, Plan B, White Lies and Cee Lo Green who is the only non-British artist to feature on the album. Will and Saul kept the solidly British flare of the album alive through working with up and coming UK talent including Liam Bailey, Delilah and Clare Maguire to name but a few. Spring 2011 saw the release of the single ‘Time’ featuring the vocal talent of Delilah before ‘Hitz’ featuring Tinie Tempah was released later that year. The seventh single to be released from ‘No More Idols’ came in the form of their anthemic collaboration with Sub Focus on ‘Flashing Lights’.

Chase & Status became one of the biggest selling artists in the UK in 2011 selling over 1 million singles in the UK alone. Their album ‘No More Idols’ did not leave the top 40 for 35 weeks and has now achieved double platinum status. Will and Saul began 2012 with a Brit Nomination for ‘Best British Group’, a true credit to their enormous success in the UK and an amazing recognition of drum and bass music by such a prestigious awards ceremony. Early 2012 also sees Chase & Status release their ‘Live at Brixton Academy’ DVD capturing their phenomenal live performance at the legendary venue on their recent UK tour. The pair also head back into the studio to work on highly anticipated album number three. Not many bands can headline a dance festival and be invited to play the mainstage at Download but Chase & Status will be doing so this Summer as part of a festival season that also sees them headlining Global Gathering and SW4 Festival as well as playing a host of other festivals across the UK, Europe and the USA. &nbsp

Retrieved from "https://bassmusic.fandom.com/wiki/Chase_%26_Status?oldid=8571"
Community content is available under CC-BY-SA unless otherwise noted.